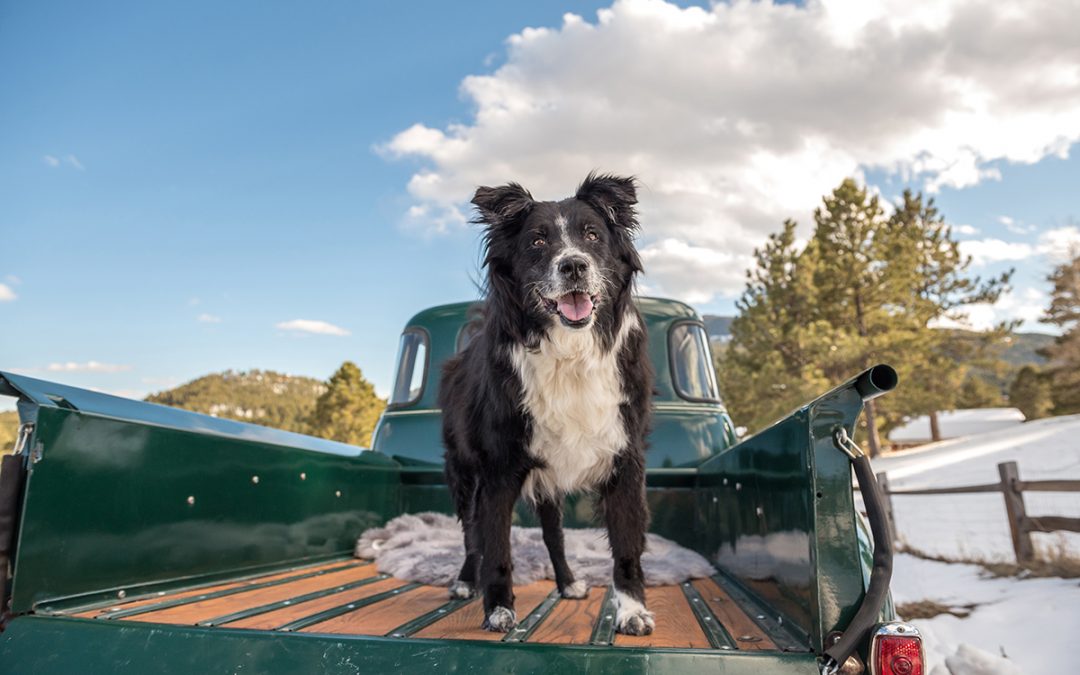 This ’52 Chevy truck was the perfect spot for 13-year-old Remy’s photos. I always suggest a location that works best for each dog’s unique needs. Remy can’t walk or sit up well anymore so I had to find a way for him to sit in one spot and be comfortable. Plus, it was winter and his family wanted to be in the photo as well. I couldn’t really ask them all to sit in a snowdrift!

The goal of the photo shoot was to have a large framed canvas of the whole family that they could hang in their dining room. I admit, it was a bit of a puzzler at first until I remembered this ’52 Chevy truck that I had used in a photo shoot years ago. Thankfully, the truck’s owner is a dog-lover and agreed. The truck combined with the beautiful mountain scenery was a winning combination!

Remy was adopted as a puppy from a Border Collie rescue. A DNA test later showed he’s not a border collie at all but a Great Pyrenees mix. His family says he’s like a person in a dog’s body. He was mellow and easy-going for sure! He was very content to sit in the back of the truck with his family. At one point during his photo shoot, 10 deer were grazing nearby and he calmly watched them.

The story of Nellie the truck

Let me say again how very lucky we were to be able to use a ’52 Chevy truck for this photo shoot! Not only is it in pristine condition but the owner is so incredibly nice! She’s named the truck “Nellie” and she told me the story of how she came across this vintage treasure. For many years, she used to pass the truck in a nearby mountain town where it was parked in a Quonset shed. Eventually the owners agreed to sell the truck to her. She drove Nellie home and that was the first time her husband met the truck!

They haven’t done a lot to the truck because they want to keep it as original as they can. Nellie is parked in the family’s garage now. She’ll stay pristine much longer than if she had stayed outside in the mountain shed. They say she’s fun to drive and that people always smile and wave – as though you were in a parade! They think it reminds people of simpler times.

The final artwork in its new home!

The framed canvases look gorgeous in the family’s dining room.