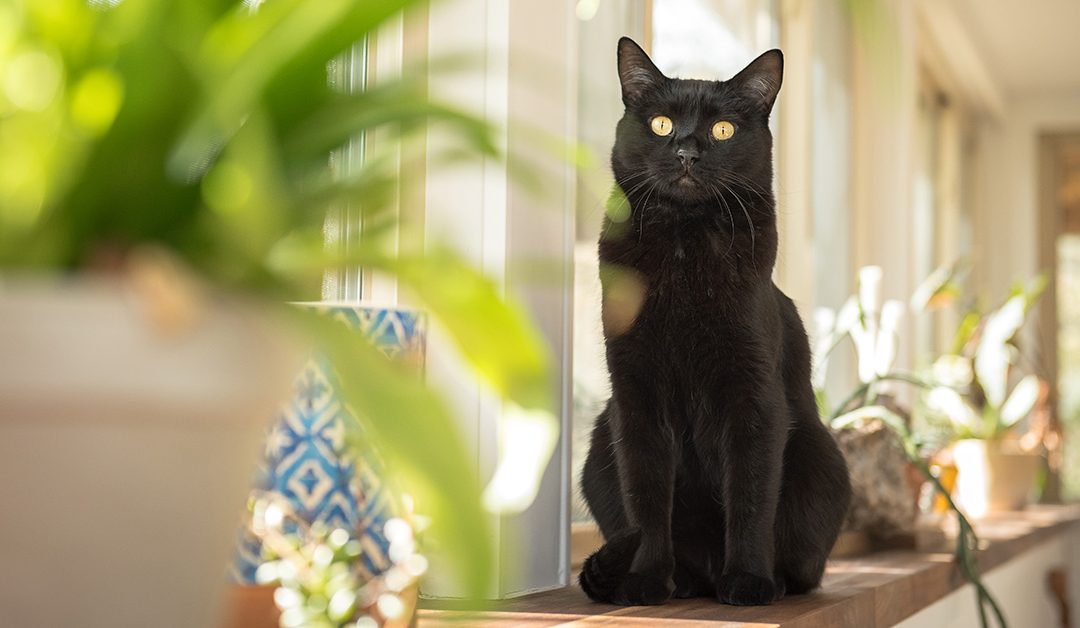 Taking photos of black cats doesn’t have to be any harder than photographing light-colored cats. Here are a few tips for you.

For your inspiration, here are some of the black cats I’ve photographed.

Ruba and Jeff Goldblum had the most amazing houseplants in their home! Who says cats will destroy your plants? There were 3 active kitties in their household and their plants looked pristine and healthy.

You might be able to use flash with a young, fearless black cat.

Manning was young so his coat was super shiny. Since Manning was fearless, I was able to bounce my flash off the ceiling to give his sleek fur some dimension. I also brought the living room footstool into the sunroom since I liked the colors together. He was curious so it was relatively easy to lure him up onto a footstool, using a piece of yarn. If a cat seems shy, I would not move furniture because it might spook them. You can get around that by moving furniture a day or two before your photoshoot.

For outdoor black cats, photograph at dawn or dusk.

Artemis is my neighbor’s cat and she spends a lot of time in my garden. It’s hard to get a good photo of her because she’s usually too close to me. When she sees me, she comes running over and rubs against my ankles. Of course, I encourage this behavior because I like having a purring cat following me around my garden. Artemis usually draws the line at crossing out onto the sidewalk so I got this shot by waiting on the sidewalk.

My neighbor actually has two black cats, Artemis and Kiki. They’re usually in my garden one at a time. In this rare instance, they’re having a standoff. Artemis wouldn’t let Kiki pass!

Albert’s nickname is “liquid kitty” because he’s so relaxed. I was worried he looked uncomfortable in this photo but his people said he was probably waiting for me to throw a toy. Apparently, he goes from “liquid kitty” to “psycho playful kitty” in a heartbeat. They said this pose shows the tension between the two sides of his personality. Now it makes sense why it’s their favorite!

Cole the black Manx cat had his own ideas about where he wanted to pose for his portrait. He had a spacious, light-filled house but he decided the dark basement was more his style. Specifically, the billard table seemed comfy to him. Silly cat! In the end, it made for a fun metal print for basement decor. Maybe the cat knows best after all?

I had a black cat named Licorice when I was in high school. She used to lay on my lap and purr while I was doing my homework. Unfortunately, she was also notorious for biting the ankles of any boy I brought home – which is sort of funny now. Licorice also used to sit on top of the fridge and bat at my Aunt’s wig as she passed by. That was kind of naughty. Years later, when I brought Dan home to meet my family, he “tamed” Licorice almost immediately. Not only did she not bite him but she let him pet her. Obviously, he was a keeper!

I regret that I don’t have any photos of Licorice. For whatever reason, the family cat wasn’t considered a worthy subject back then. There are plenty of photos of my childhood dogs so maybe the cats hid when the camera came out? Well, I’m obviously making up for lost time now with the cats I photograph!

Photographing black cats doesn’t have to be hard but if it’s causing you frustration, I’d love to help. It would be fun for me to photograph your black cat!